Your Home Theatre Installer And Expert 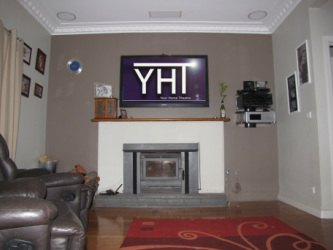 OLED HDTV’s are new to the market, much more expensive, they are LCD’s answer to compete with plasma, the energy rating is extremely good, and if power consumption is your worry then LED is the Best option for you.  However I will say that the difference in cost right now compared to the same level of Plasma……………you will get a lot of years out of your plasma to make up the difference that you will save in your power bill.

The Energy rating on a television, something that most retailers don’t point out to you “it is based on 10 hours a day for 365 days of the year” So when you compare it to your fridge something that is actually on the whole time the energy rating sticker states what is actually used…………..when it comes to your television it doesn’t reflect the average users power consumption.  So understand how much you actually use your television if the energy rating is a factor in your decision.

A few basics to keep things simple, LCD is a light based technology which means everything you see on the screen is made from light.  Which in important terms your blacks are made up with light………every colour has a shade of black in it.  So we call that false black.  Plasma’s are a pixel based technology which means they turn of the individual pixels and create what we call a true black.  And that is why plasma can create a much clearer picture because it is truer than the light based technology.  Now LED is LCD’s answer to improving their picture so they can compete with plasma.  LED has two panels inside there is a  LCD panel in front to take care of the colours, and the LED panel behind the LCD panel and its job is the blacks, so the picture can refresh faster and create a much better movie experience.  That is also how LED can create such a high energy rating because it takes little to no power to run an LED light.

In short LCD was originally designed for small computer screens.  And they work great for that as the image doesn’t have to be blown up to a large size, but when you make a larger LCD screen the picture tends to be fuzzier or less clear.  Ideally if you don’t choose LED over the LCD, (for cost reasons) screens smaller than 42 inches (107cm) LCD is perfect.  There are two other reasons to choose an LCD screen.  If you play allot of games on your television, like Xbox or PS3 and when I say allot I mean for hours a day, because LCD doesn’t have the image burn in risk that plasma’s do.  And the other reason is it reflects less light than plasma so if you have allot of natural light in the room.  Plasma’s have a glass panel on the front so it will reflect more……………but keep in mind ALL televisions reflect light and if you can close your curtains…………don’t make this an issue.


Difference between Ultra HD and 4KTechnically, "Ultra High Definition" is actually a derivation of the 4K digital cinema standard. However while your local multiplex shows images in native 4096 x 2160 4K resolution, the new Ultra HD consumer format has a slightly lower resolution of 3840 X 2160.

This is one reason why some brands prefer not to use the 4K label at all, sticking with Ultra HD or UHD instead. However, the numerical shorthand looks likely to stick. As a broad brush label it's so much snappier!

The lifetimes of all types of Televisions are around the same.  The main difference is between brands not the actual LCD/LED/.  You get what you pay for.  If you see a $4000 dollar television and a $1500 television………you’re not buying a used car.  The $4000 television is a better TV.

Will I need to change my Blu Ray player?  Yes you will need to update your Blu ray player, and most likely you will have to update your HDMI lead as well.  Unless you have already have the “1.4” rated HDMI.  The only Blu Ray player that will be capable for the software update would be the PS3, but they haven’t as yet released it.

High Definition Media Input 1.4 allows you to send full 1080p 3D content to run everything through each other you will need to have everything rated at 1.4.  The cable sends 1080p it also has Ethernet information that it can send an as well it can send Digital audio both directions.  This means only two cables for your television the HDMI and the antenna lead.  And it is of the best possible quality.

What is the difference between 1080i and 1080p?
They are both sending the same information; the difference is how they are sending it.  In 1080i each frame of video are sent in alternative fields.  The fields are composed in 540 rows of pixels or lines running from top to bottom of the screen.  To make up the 1080 rule every second line is doubled.

In 1080p each frame of video is sent out progressively.  This means that none of the lines are doubled and it makes up a full frame picture.   And the result is a much smoother and clearer image.  In short even though you see 1080 in both so you can opt for the cheaper option………..there is a big difference between them.  Progressive is better.